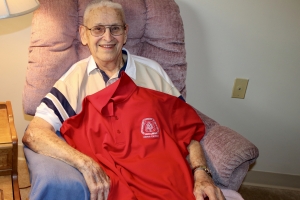 Retired member and veteran, Frank Mekina, celebrates his 102 birthday today! Born on September 6th, 1917, Frank grew up in Barberton, OH. At the age of 16 Frank joined the Civilian Conservation Corps where he built roads, log cabins and assisted in construction of University of Berkley campus. After leaving the CCC, he then joined the navy and worked repairing war ships.

When the war ended, Frank continued his work in construction. He joined the Carpenters Union with Local 285 in 1952. He spent his free time building houses and spending time with his wife and two daughters.

Working with contractors including Ruhlin and Donley Construction; Frank retired after 30 years with the Carpenters Union. He continues to attend Local 285’s monthly meetings for retired members.

Frank is in good spirits and enjoys telling his stories.  From the IKORCC, we want to wish Frank a very happy 102nd birthday!