The ordinance was introduced by Uhrichsville City Councilman Eric Harmon. Harmon spoke in support of the ordinance and applauded unanimous Council passage of legislation designed to encourage fair and responsible construction contracting.

The legislation had garnered the support of several area labor unions including the Indiana/Kentucky/Ohio Regional Council of Carpenters (IKORCC). IKORCC members Mark Whepler, Butch Teddrick, Keen Edwards, Ricky Thesson, and Michael Fitzgerald –- in addition to IKORCC business representatives Jared Hovanick and Abe Bruner –- attended the hearing and voiced their support for the ordinance. 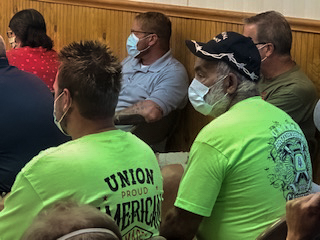 “This common sense legislation is a taxpayer protection plan that ensures construction projects are completed on time and on budget while utilizing a skilled workforce. It’s important that the public holds a stronger confidence that their hard earned tax dollars are being spent properly and responsibly on construction projects that will help improve the quality of life for all Uhrichsville residents,” said Harmon.

The provisions in the ordinance already exist largely at the federal, state, and county levels. Harmon urged members of Council that it’s time to enact the provisions at the local level in order to promote quality construction and fiscal responsibility.