A couple of weeks before Thanksgiving, Local 1485 learned that a lifelong resident of LaPorte, Indiana had been enduring some health issues for several months. He’d been in the hospital and after a difficult recovery was on the path to coming home.

The family was excited about the news; however, they knew he’d be coming home in a wheelchair and would have trouble getting into the house. Two MAC (Member Action Committee) members brought it up and suggested that we build a wheelchair ramp for the gentleman.  The man’s son recently joined Local 1485 and they thought that this would be a good teaching moment about the many ways the Carpenters Union helps the community. 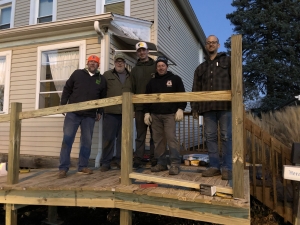 At the same meeting a retiree of Local 1485 stated how he had been approached by another member of the community about fixing a wheelchair ramp for a woman with an adult handicapped son.  Well, how could we do one and not the other?

As an officer of the Local, Nick Pollock spearheaded both projects the following weekend.  After visiting both houses and speaking to both homeowners, he had the details needed for the ramps to be drawn and planned for construction.

After a few nights of drawing and figuring, he was able to get the materials for both wheelchair ramps ordered and had a delivery set up for the day after Thanksgiving.  Once he knew when the materials were going to be available, Nick started recruiting the help, and to no surprise, had five MAC members step up immediately to build the first ramp the Saturday after Thanksgiving, so the ramp would be ready for the homeowner’s arrival December 1.

The five-foot-wide by thirty-two-foot-long ramp was constructed and ready to go. Unfortunately, the homeowner had a few setbacks and won’t be arriving home until closer to Christmas now, but has seen pictures and is very grateful for the generosity from the community he loves. After eight months of being in the hospital, he can’t wait to get home and try it out.

The following weekend we were able to assemble a new crew of MAC members and retirees to address the other wheelchair ramp.  Regardless of the fresh layer of snow that blanketed the ground, our members happily completed the task at hand.

Local 1485 was chartered in LaPorte Indiana in 1903 and since then has supported the community in many ways including projects like the ones mentioned above.  We will continue to honor these community service traditions for decades to come.

For monthly IKORCC news & updates, sign up to receive the newsletter!