This year both the United Brotherhood of Carpenters and Southwest Ohio’s own Local 2 celebrate their 140th birthday.  In 1880, carpenters in Cincinnati were making just $1.50 a day for their over ten-hour days.  The founding members realized their strength as a joint body was no match for “scabs” without a national union’s support.  During the formation of the UBC at the Chicago convention in 1881, Local 2 was granted a charter with the second most delegates in attendance – making it the longest continuous carpenters local charter in the UBC today.

Cincinnati was settled by a majority of German immigrants in the early-mid 1800s so every other meeting’s minutes were transcribed in both English and German language, according to Art Galea Junior. The former Local 2 President and former Southwest Ohio’s training center director spoke about what the history means to him, “it means quite a lot…some of the strife those guys went through made me really appreciate what we had.” “I appreciate it, I’ve been a member over 50 years…I’ve got a lot of memories.”

Art, one of seven in his family who would eventually join the Carpenter’s Union, started his apprenticeship program in 1968. Upon graduation he served in the Vietnam War, returned home, and led the apprenticeship program into where it’s at today. They transitioned from classes at the college to the hands-on facilities you see today.   He led the programs through several buildings until it landed in its current home. 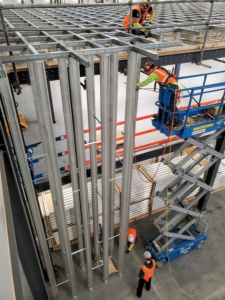 Thanks to these advanced training centers, even one of the oldest unions can build projects with the newest technology. Multiple union contractors landed the project to install a state-of-the-art grid system for a Kroger Co. Fulfillment Center. Right in Monroe Ohio, UBC Millwrights installed a robotic vertical grid system in the 375,000 square feet facility. The first of its kind, the grid or “The Hive”, has over 1,000 robots flying through the air, up and down, to pick online grocery orders for deliveries up to 90 miles from the hub location. Up to 100 Millwrights were on the project at a time.

Out of Work List – How to Register
Scroll to top
Solar Bootcamp August 2nd-5th Registration!

Register today for the IKORCC’s 4-day Solar Bootcamp in Greenwood, IN.