Last week the Indiana/Kentucky/Ohio Regional Council of Carpenters hosted informational events in six locations throughout Indiana to stand up and speak out against tax fraud and worker exploitation in the construction industry.

Dozens of lawmakers and elected officials took part in the events, which called attention to the fraud crisis that exploits vulnerable workers and families, while undermining law-abiding contractors and stealing resources from taxpayers.

“It’s a question of fairness,” said Mike Kwiatkowski, Executive Secretary-Treasurer for the Indiana Kentucky Ohio Regional Council of Carpenters. “As taxpayers file their returns, we are standing up against unlawful practices that have been business-as-usual for too long in construction. As a result, taxpayers lose government services, and law-abiding businesses and their employees lose work to the cheaters.”

In Merrillville, lawmakers and United Brotherhood of Carpenters members celebrated the action taken by prosecutors against two Indiana construction companies. Prosecutors filed tax fraud and money laundering charges against the companies behind a $30 million project in LaPorte.

According to the indictment, the subcontractors misclassified workers as independent contractors, and paid a group of employees by a single check and did not withhold the required taxes. For years, IKORCC business representatives have turned in dozens of complaints against these subcontractors.

“We applaud Prosecutor (John) Lake and his team for all their hard work. We look forward to a positive outcome in the case. Tax fraud and worker misclassification is a real problem in the construction industry. We will fight to maintain our quality of life in our communities. Shady contractors and developers break the law and deprive our communities of local taxes. The amount of lost revenue to these communities each year is staggering. This must end and the Carpenters Union is committed to devoting resources to help stop this growing epidemic. Our hope is to get some real enforcement on this so that our local law-abiding contractors have a chance to compete without breaking the law.”

Read more about the case here 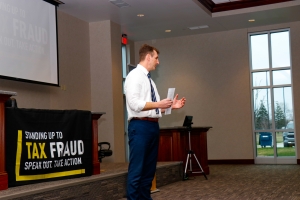 The following elected officials spoke at the event and took strong stands against tax fraud:

Congressman Frank Mrvan said, “To the working men and women of NW IN, I want you to know I will have your back. I will continue to advocate to make sure bad actors don’t circumvent the rules for their competitive advantage.”

See coverage of the event here 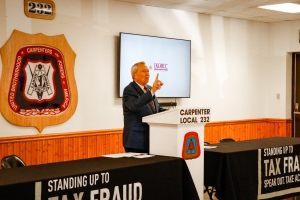 Indiana House Minority Leader, Representative Phil GiaQuinta said, “I don’t think all lawmakers know the gravity of the situation and the lost revenue.” 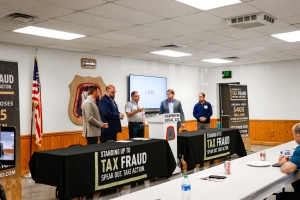 In an unexpected moment, elected officials from both political parties came together to take questions from the packed local union hall and come up with solutions. “What you are seeing today is both parties coming together to tackle an issue that affects all of us. This is what our political system is supposed to look like,” said Kyle Gresham, IKORCC business representative. 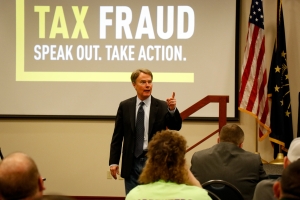 Marion County City County Councilor Ali Brown passionately spoke about the value of unions and how tax fraud exploits workers. “I am going to protect the most vulnerable in our city from these labor brokers. That’s a promise,” Brown said.

Councilor Kristen Jones, who says her district is full of new hotels and redevelopment, said, ““I want to make sure we are using Responsible Bidder Ordinances on projects in my district.” 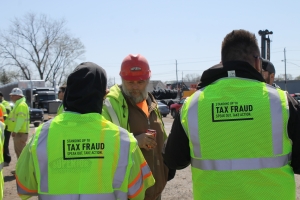 Indianapolis Mayor Joe Hogsett wrapped up the event with a passionate speech about worker’s rights and his dedication to ending tax fraud. Mayor Hogsett said, “It’s not a union issue, it’s an issue that affects all taxpayers – everybody!”

IKORCC Business Representatives also visited a jobsite in downtown Indianapolis to educate members on tax fraud and steps they can take to help curb the problem. 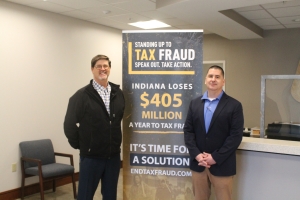 Our Tax Fraud Days of Action continued in Terre Haute, Indiana where local lawmakers and IKORCC members gathered to bring awareness to the growing problem.

County Councilman Todd Thacker joined Deputy Prosecutor Jason Saunders to speak to apprentices and the public about tax fraud and efforts to curb the practice in Terre Haute. 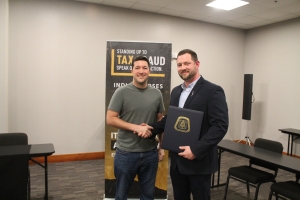 To wrap up a full week of events, the IKORCC office in Newburgh, Indiana hosted an informational meeting with lawmakers.

Tax fraud hurts everyone. Workers are paid off the books or intentionally misclassified as independent contractors by shady subcontractors and labor brokers who are hired by contractors to underbid law-abiding businesses. Fraud happens on all types of projects, including taxpayer-funded construction. Rampant cheating causes a massive loss of revenue and makes it difficult to fight COVID-19, repair roads, bridges and schools, care for veterans and shore up Medicare and Social Security.

According to a new study recently completed for the United Brotherhood of Carpenters, the construction industry tax fraud epidemic is costing U.S. taxpayers more than $8.4 billion a year. Some 1.3 to 2.16 million construction workers are paid off the books or misclassified as independent contractors when they are really employees.

In Indiana, the estimated loss is over $405 million dollars annually – money that could be spent hiring teachers, state troopers or resurfacing roads.