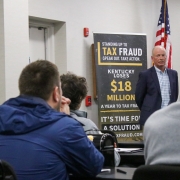 Indiana Kentucky Ohio Regional Council of Carpenters Representatives spoke with state and local officials on April 13th and 14th to learn more and speak out about construction industry tax fraud in Kentucky. Events were held by IKORCC across the three states and sponsored by the United Brotherhood of Carpenters across the United States and Canada.

More than 50 Senate and House Representatives stopped by our setup in the capitol building in Frankfort on April 13th. The statehouse was in session and full which opened the door for IKORCC to make new introductions with lawmakers who were unaware of construction industry tax fraud were made. All 200 meals and toolboxes were handed out.