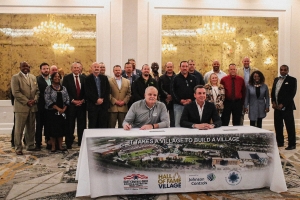 CANTON – Last week marked a monumental moment for the Canton area and potentially the future of project labor agreements.  The Pro Football Hall of Fame has recommitted to the next phase of their Hall of Fame Village Project being completed using local, union workers.  Michael Crawford, president and chief executive officer of the Hall of Fame Resort, and the East Central Ohio Building and Construction Trades Council President Dave Kirven jointly signed a PLA to confirm the commitment on Wednesday, April 14th, 2021.

“A PLA is a prehire pact with at least one [labor organization] that sets employment terms and conditions for all workers on a building project, regardless of whether their employers are unionized or nonunion contractors”, Bloomberg Law reports.

Canton has the most PLA’s than any other city in the United States with over 100 according to William Sherer, Business Manager for Ironworkers Local 550 and Canton City Council President.  A PLA with the Hall of Fame Resort sets a standard for the area and will help spur others’ interest in the agreements, according to Sherer.  He said economic development [like this project] spurs more economic development.

Part of this labor agreement includes cooperation with the Stark County Minority Business Association (SCMBA).  The goal set by SCMBA and the Hall of Fame Resort is 12% minority participation in all aspects of the project.  Kirven told us ongoing projects on site are currently at 19%, exceeding the goal.  In a speech at the signing given, Michael Crawford said “we fumbled the ball on community and diverse involvement on the first phase of the project” when talking about the importance of the SCMBA partnership and the Hall of Fame’s commitment to making inclusion a priority in these new phases of construction.

Labor leaders and other government officials were present for the signing as well.  City Councilman Jason Scaglione was excited to see people working and bring ‘vacation spending’ back to the region.  Fellow councilmember John Mariol was also invested in the importance of the PLA bringing good, union, middle-class jobs back to Canton.

This next stage of construction on the Hall of Fame Village means ongoing work for the carpenters in the area.  Senior Business Representative Kevin Ennis says, “continued work at the Hall of Fame has meant a lot of man-hours for our members”.  Ennis also said the Council has signed several new minority contractors thanks to the partnerships at the project with continuous requests for manpower on separate jobs.  “This [PLA] means steady work for our members for at least another two years if not more.”