The Ala Moana Center was raided by state investigators over charges of contractors committing payroll fraud. Investigators from state tax, labor and business departments went to the luxury mall in response to complaints from the Hawaii Construction Alliance. The Alliance is a group of trade unions that includes the Hawaii Regional Council of Carpenters.

Information on alleged improper practices was gathered by undercover informants, including a video of workers being paid in cash. Watch a news report on this raid through the Top of the News section of PayrollFraud.net.

“Workers are being paid in cash by these contractors and subcontractors which begs the question: are they filing the proper paperwork with the state?” said Tyler Dos Santos, Alliance Executive Director.

US Senator Brown (OH) appeared with Labor Secretary Tom Perez at a forum in Cleveland to meet with workers who have been victims of payroll fraud. They met with construction, package delivery and other workers who have been denied basic employment protections because they were misclassified as independent contractors or paid off the books.

“We should call this what it is: fraud,” said Sen. Brown. “This is unfair to workers, unfair to businesses that play by the rules, and it must stop.” 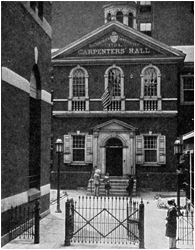 In August 1881, 36 carpenters from eleven cities met in a Chicago warehouse to form a national union. Four days of heated discussion produced a constitution, a structure, and a new organization with two thousand members—the Brotherhood of Carpenters and Joiners of America.

The founding of the union was a response to changing conditions in the construction industry in the second half of the 19th century. The old ways of building were disappearing as a new “modern” system emerged.

Shifts in the larger economic order transformed the daily life of the working carpenter. Facing turbulent times and an uncertain future, carpenters turned to unionism to serve their collective interests.

The carpenter in colonial America had been a man with considerable bargaining power. As one of a small number of skilled artisans in a young society eager for new houses, commercial buildings, and wooden ships, he often earned more than twice as much as his English counterpart.

The carpenter who carried his tools across the Atlantic also brought with him the European “guild system” in which the categories of workers encompassed masters, journeymen, and apprentices. Each handled the tools of the trade in a centuries-old division of work responsibilities. The rules were unwritten, but tradition held that masters looked out for the long-term welfare of journeymen and the training of apprentices, as they passed on the “art” and “mystery” of the craft to the next generation. The division between the groups was not one of permanent status, but of age, years of experience, and levels of skill.

Barring unforeseen circumstances, an apprentice who stayed with the trade could expect, in time, to become a master. To the extent that masters, journeymen, and apprentices shared a common work experience and vision of the industry, their economic interests tended to coincide. Early efforts at organization focused on stabilizing prices and reducing competition between carpenters, not employer/employee conflicts. In the 1700s, master and journeymen carpenters united in most American cities to establish “books of prices,” volumes that standardized the costs of every aspect of the carpentry trade.

As the Industrial Revolution unfolded in the United States, the guild system gave way to a capitalist set of relations in the building industry. The dramatic increase in post-Civil War construction activity outpaced the ability of the masters to meet the labor demands. The volume of building activity shot up 250 percent between 1866 and 1906, an upsurge that included wild swings of phenomenal expansion and terrifying crashes. The dizzying pace of new construction was part of a nation in change. Railroads connected once remote towns and villages. Technological innovations wiped out entire handicrafts and introduced the factory system to growing numbers of industries. The United States emerged from a sea of self-contained communities to a unified country linked by communication and transportation systems.

Mechanical inventions and new building materials altered the carpenter’s work. Factories with new machines—cut-off saws, mortising and tenoning machines, borers, compound carvers, and power sanders—enabled the mass production of items such as blinds, doors, flooring, and stairs that had been fashioned by hand. Cast-iron replaced wood beams as early as 1852 and, by the end of the century, the introduction of structural steel reinforced concrete, and the elevator laid the groundwork for the modern skyscraper.

But the industry changed in other ways as well. The opportunities for profit generated by economic growth attracted speculators and middle men with little or no attachment to the traditions of the industry. These men seized the opportunities created by escalating construction demand but remained ignorant of the issues of craft pride and quality that characterized the guild system. “Jerry” building and “botch” work were frequently the by-products of the new breed of builders who emphasized speed, productivity, and profitability.

The emergence of the contractor/businessman strained the personal connections that had existed between masters, journeymen, and apprentices. At one time, a carpenter might have worked for a single master for twenty years; by the late 1800s, he might have as many as twenty employers in one year.

At the turn of the century, Connecticut carpenter J.W. Brown looked back at the five decades of his trade. He recalled the times when his employer “felt himself under a moral obligation” to the working carpenter and his steady employment. Now, reported Brown, the carpenter had become “accustomed to look upon himself not only as a wage worker for life, but as an appendage to a monstrous machine for the production and distribution of wealth.” 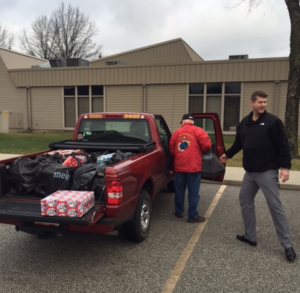 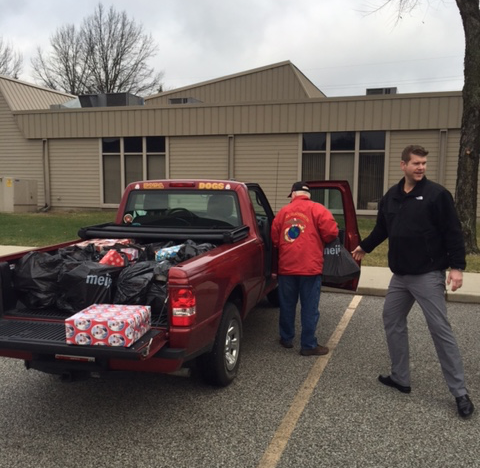 In an ongoing effort to give back to the community, Local 1005 of the Indiana/Kentucky/Ohio Regional Council of Carpenters (IKORCC) collected and donated toys to the U.S. Marine Corps Reserve Toys for Tots program this past holiday season.

The Toys for Tots Program collects new, unwrapped toys for children each year. Local businesses serve as collection sites where community members can drop off toys, and the collected toys are distributed to less fortunate children within the community so they can experience the joy of Christmas.

Working with Reggie Hess, Marine Corps League District 1 Vice Commandant, Local 1005 collected over 100 toys and gift cards. “We are so appreciative of the support from Local 1005. We had a very successful holiday season, and it could not have been done without their generosity,” commented Hess. “This past year, we provided over 2,400 Christmas presents to children in Porter County, and in some cases, we were able to give out up to five toys per child. It’s because of generous people like those in Local 1005 that we are able to bring happiness to kids and families on Christmas day.”

Throughout the year, IKORCC members volunteer in their local communities in countless ways, including collecting donations for local charities. “It’s all about giving back to the community and to those who may be going through a tough time,” commented Eric Yuhasz, Local 1005 Secretary and IKORCC Representative. “We have so many members who willingly volunteer time, talents and donations without hesitation. There really isn’t a better feeling than witnessing the joy and graciousness of the families receiving our volunteer services.”

Jerome Stanford completed the apprenticeship program with hundreds of others from Indiana and Kentucky and were honored with a completion ceremony in December 2015. As the selected speaker to represent the graudation class, Jerome addressed the members and guests that night.