The Indiana/Kentucky/Ohio Regional Council of Carpenters has two Health & Welfare Funds, one for Indiana/Kentucky and another for Ohio. Both Funds are healthy with growing net reserves. 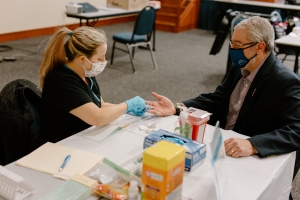 Effective September 1, 2021 the trustees of both funds were pleased to announce, that regardless of the amount of contributions received, all apprentices will be credited for all hours s/he attends school to receive training required by a training program affiliated with the United Brotherhood of Carpenters and Joiners of America. The apprentice shall be credited with an amount equal to the actual number of hours the apprentice attends school per week.

The Indiana/Kentucky fund’s Board of Trustees is pleased to announce that effective September 1, 2021, it has reduced its bank threshold (point at which monthly contributions received above required premium are allocated to participant’s bank) from $200 to $150. The ability to do this is a direct result of improving net reserves.

The UBC continues to work to provide the best prescription drug program available in the marketplace. Currently, the IKORCC and Ohio Health plans participate in a pharmacy benefit program negotiated on a national basis with Express Scripts, known as Level Care Pharmacy Program. This program covers over 30 participating Carpenter Funds throughout the country. In early 2021, after many months of review, analysis and negotiation, a new five-year agreement was finalized covering mail order, retail, and specialty drugs. The program is projected to save over $362 million over these 5 years for the participating Carpenters Funds, with over $40 million in projected savings for the IKORCC and Ohio plans.