Cory makes an impact wherever he goes and Richfield Training Director Dan Sustin has seen the significant impact Cory has on everyone around him. 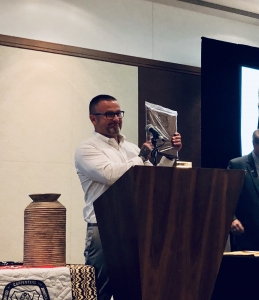 As my friend and brother, he challenged me to be a better me. With him in the building, all of us had no choice but to strive to be better. When he was still in the classroom, I loved walking by and hearing how he made life lessons out of carpentry lessons. By helping to make them better people, he was giving them the confidence to grow into better carpenters,” Dan said.

This quote might as well have been written about Cory Hudson. Cory is a great teacher, mentor, and colleague. Cory is a person who truly cares about all aspects of life.

As a valued, experienced instructor with the Ohio Carpenters’ Joint Apprenticeship & Training Program, Cory has consistently proven his willingness and ability to bring the process of learning and growing to a highly personal and relevant level. The fact that he so obviously cares for those with whom he is involved, maximizes his effectiveness, and heightens the quality of instruction received by his students.”

For Cory Hudson, winning the award was a huge honor.

“To me, the Don Sherry Award means I’ve achieved a mission that I swore to achieve a long time ago. I realized early in my career that if I didn’t have people around me that cared enough to teach me how to successfully become a carpenter, all while setting an example of how to navigate my way through not just a job but LIFE, I’d be lost. Many amazing people took a chance on me and I swore that when I got the chance to do the same I’d do it. I’ve been blessed to have so many opportunities to share my story and the knowledge of our trade with others, both in the field and during my time as an instructor, that in the end, I couldn’t have been more blessed, and I know in my heart that I’m the lucky one. I owe a huge thank you to both the people who have helped guide me, and to those who gave me a chance to share the lessons I’ve been taught. When it’s all said and done, this award means to me that I’ve been blessed to have been given a chance, and I vow to always do the same for others,” Cory said.

Here’s what apprentices and colleagues say about Cory:

“The fact that he goes out of his way to help whoever in need with whatever problem they have, is mind-blowing in this day and age. Not many can hold a candle to his talents and no one I’ve met has a bigger heart than Cory. I’ve heard of him helping people in the brotherhood even after hours with tougher struggles than a lot of us know and I look up to that. In all honesty, he is the real definition of a role model. I’m not sure if the guy ever sleeps, but if I become half the carpenter, friend, father, the man he is I’d say that’s pretty good.”
– Devon Rangel, apprentice

“Cory Hudson is a good man, a man with compassion, integrity, morals, and values. I don’t know Cory as well as some others do, but, I do know, I can call him a friend. I feel I am a better person for simply knowing Cory, as he has that effect on people. In my brief encounters with Cory, I feel a better man. I can only imagine the impact he has had on his co-workers and the apprentices he has taught and mentored. Cory Hudson is a good man, a man I am proud to call, friend.”
– Jon Parman, IKORCC Business Representative

“From the first time I met Cory when I was an apprentice, he was very friendly, always smiling, ready to help, stand-up guy. He is easy to talk to and would give the shirt off of his back to help a Brother. I saw him on many occasions stay late as an instructor to help apprentices who were struggling. He is one hell of a listener and values his friends, family, apprentices, and other Union Brothers as if they are truly his family. Everything that Cory does he gives his all. I see a lot of myself in him and because of his example, I strive to be better. I HIGHLY recommend Cory for the award as there simply cannot be anyone else that is his equal in kindness, hard work, the ability to adapt, and just an amazing example in our Brotherhood.”
-Jay T. Webb, Journeyman Carpenter & former student

“Cory Hudson is a teacher at the North East Ohio apprenticeship program, but in all reality, he is way more than just a teacher. He’s a true mentor to every apprentice that goes through the program. As a teacher, he does his duties to teach us the skills it takes to perform our job as carpenters, but he doesn’t just stop there. Cory is willing to help you with anything that he’s able to and it doesn’t always have to be carpentry. I would have to say he’s the hardest worker in the room if he doesn’t know the answer he will find it. If you aren’t getting the math he’s going to find a way to get it to make sense to you. He truly does go above and beyond to make the future generations of carpenters more skilled and better trained. He told my class once, it is good to know how to do something but when you learn why you build it a certain way that’s when everything will be easier. That changed my whole career and everything made a lot more sense. Cory won’t stop at making you better at math or layout, he’s going to make you a better person.”
–Brandon Locklear, former student

“To me, Cory Hudson has always exemplified hard work, discipline, and leadership. Even from when I met him as an apprentice, he has always possessed the work ethic that set him apart and above so many others. He always worked to push people in a positive direction. His ability to lead with integrity made him a man to strive to be like. He is that older brother that keeps you wanting to be better whether he is around or not. He has made me want to be a better carpenter, leader, and friend.”
– Nate Speidel, union brother

“If it was not for Cory I would literally not be where I am in life today. I was a non-union worker putting soffit on a school where he was working. He made a point to come over and talk to me knowing nothing about me and even stayed for two hours after work to tell me about how becoming a union carpenter could change my life, and it has. Cory found me at my lowest point, I had two kids, a wife, and almost no money. Cory vouched for me in 2008 to get on with OCP contractors. Since then I learned everything I could to become the best I could be from apprentice to journeyman then to foreman and currently a project superintendent. If it was not for Cory I don’t know where my life would be at this point, but I thank god that he took the time and invested in me so that I could do the same for him.”
–Bill Jones, journeyman, former apprentice