Although the local JATC was unable to hold their annual open house, the Youngstown-Steubenville Hub still found a way to introduce high school students to the opportunities within the IKORCC apprenticeship program. 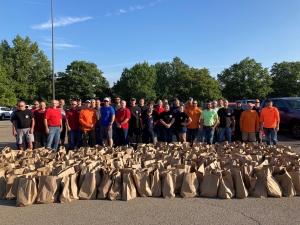 The Mahoning Valley Skilled Trades Expo hosted their second skilled trades event aimed at promoting union trades to seventh through twelfth-grade students.  Unfortunately, the event was canceled last year due to the pandemic but returned with new ways to promote careers in the trades.  The Hub partnered with local contractors like AP O’Horo, the Western Reserve Building Trades, and the area school’s Educational Service centers to host the two-day event.  The event launched with a public open house to recruit and educate members from the community outside of just schools. Students from three Ohio and two Western Pennsylvania counties were given a chance to experience hands-on activities at each of the craft’s stations. Splitting this year’s event into two days gave the over 4,500 students more time to visit with each craft.

The Youngstown-Steubenville Hub has also partnered with the United Way to build several wheelchair ramps and assist the team in bagging groceries for more than 350 families unable to reach a food pantry in person.  IKORCC members along with community members spent about three to four hours bagging groceries for United Way’s Satur-Day of Caring. The groceries were loaded into volunteers’ cars to be delivered to elderly members of the community.