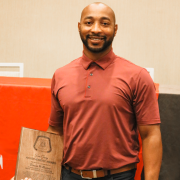 Don Sherry passionately served the Indiana/Kentucky/Ohio Regional Council of Carpenters for nearly 20 years as a business representative and Director of Organizing. He was the President of Carpenters Local 175 and a dedicated advocate for workers rights and unions. Colleagues said his dedication to this organization was second to none.

To honor Don’s service and dedication, each year since his passing the IKORCC has given The Don Sherry Achievement Award. The award recognizes a rank-and-file member who has gone above and beyond in their service on the job site, with contractors, in MAC meetings (Member Action Committee), and in their community. In addition to giving an award in his honor, IKORCC delegates raise money each year during their annual conference and donate the proceeds to the Diabetes Foundation in Don Sherry’s honor.