In Canton Ohio, carpenters have been working on an important renovation at a significant site. At 530 Tuscarawas St W, in a city almost as old as the state itself, Christ Presbyterian Church sits on the same land dedicated for the city’s first house of worship back in 1805 by the city’s founder. 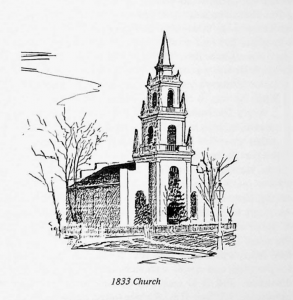 Bezaleel Wells originally sold the land to the Reformed and Lutheran congregations. The two did not have the funds at the time for their churches, familiar with the idea of union churches, the pair shared the land for their services. With timber cheap and readily available at the time, the people of the churches donated their labor to build a small log frame church.

“…the log structure was sided with rough weatherboarding, that it stood on posts some 20 inches above the ground, that the flooring was loose planks and that the seats were puncheon slabs with backrests.” (Ramsayer)

The congregations eventually outgrew the land and they moved on to other areas of town. Wells donated the land to “any religious society who would take possession of it for a house of worship” (Ramsayer).  The Presbyterian church acquired the land in 1827 and after several years of ideological disagreement, the women of the church finally raised enough money to fund the construction of the new building in 1833.

“Many of the early pioneers and professionals of Canton were members of the congregation and some even served as church elders, most notably several members of the Saxton family. This included John Saxton, who founded the Canton 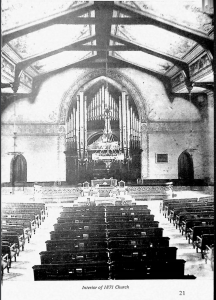 The couple married on January 25, 1871, the first ceremony in the new sanctuary.  The event was held before the final

construction of the rest of the building.

Many of the initial expansions of the church were to accommodate the growing population of Canton and the congregation.

The work carpenters are wrapping up now that began in June 2020 includes; the renovation of the main pulpit, rehabilitation of the sacristy (where historic documents are stored), offices, and several other rooms within the church.

In the first phase of work, carpenters demoed the existing chancel platform and wall paneling.  After framing a new platform at four different levels, they finished it off with tongue and groove oak flooring.  The main focal point of this work was the wooden arch built to complement the existing stone architecture.

To get it precise, carpenters templated it out in plywood which was later used for the backing.  Using lasers and templates, the pieces were numbered and scribed into place.

The detailed work the carpenters accomplished in these recent renovations is a testament to their craftsmanship and their training. 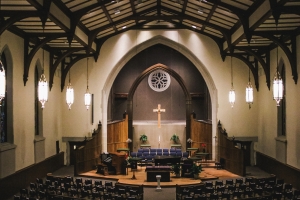 You can read more about the history of this church and its renovations in the 1971 book written by Ralph Ramsayer for its 150th anniversary here.