It was odd he hadn’t heard from her yet, despite repeated calls and texts. His wife and two kids dropped him off at the airport less than two hours before. As the plane taxied slowly down the runway, Adam was relieved when he felt his phone vibrate and he saw Erica’s name on the screen.

That relief was short-lived. It didn’t take long before Adam registered what the man on Erica’s phone was saying.

“Your family was in a head-on collision with a semi, you need to get here immediately,” a police officer said.

The moments that followed were some of the worst of Adam’s life. The officer said his wife and daughter may not survive. The flight crew couldn’t stop the plane. He had only a minute or two to make a call before his phone lost signal. So, Adam called a friend, lost signal, then sat on a flight for four grueling hours, wondering if he still had a family to go home to. 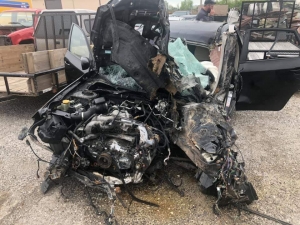 The Stampley’s vehicle after a head-on collision with a semi nearly killed three members of the family. (Photo provided by Adam Stampley)

When the flight landed, Adam got an update from the hospital. One of Erica’s kidneys was destroyed in the accident, the other was failing. She was bleeding internally. Her femur was broken in half. She’d died and been revived three times already. Doctors gave her less than a five percent chance of living.

His six-year-old daughter Araya was at a different hospital in a coma. Her appendix ruptured, her bladder was punctured, and she’d undergone surgery to repair injuries to four areas of her spine. She would survive, but her dreams of being an Olympic gymnast were over.

Eight-year-old Thomas fared better. He broke three ribs and fractured his finger but remembered the entire accident and was scared. 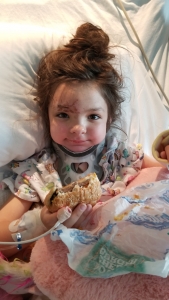 6-year-old Araya recovered at Riley Hospital for Children after a serious car accident in 2019.

Now in Las Vegas, Adam reached out to Local 133 members Jason King and Greg Tucker. They helped him navigate the airport and get a flight back to Indianapolis. It took a total of twelve hours before Adam saw Erica, and days before he saw the kids.

At the hospital, Erica’s condition was so grave doctors had Adam make two sets of plans: one if she passed away and another if she survived and couldn’t walk. He wouldn’t need either of them.

Despite the odds, Erica survived. Thomas was released two days after the accident, and Araya almost two weeks later. To help with expenses, Locals 133 and 301 took up a collection at their union meeting and on job sites, raising over $2,000 for the family.

With Erica recovering in a rehabilitation hospital and expenses mounting, Adam went back to work for Circle B. Union brothers and sisters donated hours so he could see his wife and still get paid.

“Something like this shows you the meaning of brotherhood. I couldn’t believe how good people were to my family,” Adam Stampley said.

In August, the kids started school. For Thomas, it was nothing new, but Araya was in the first grade and it was her first day of school ever. It was her first day without her mom, in a neck brace, with hair lovingly styled by her dad. “I wouldn’t say we were thriving, but we were surviving,” Adam said, adding that he learned a lot about princesses over the summer too. 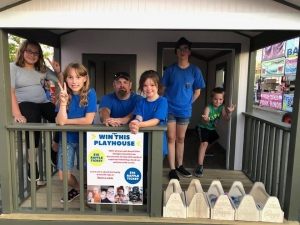 Adam Stampley and his children visit the Indiana State Fair where carpenters raised money for his family.

Adam smiled for his kids, but he still worried a lot. He worried about Erica, wondered if she’d be able to walk again, about the house, and how to get it ready for her eventual return. He had a lot of things to worry about, thankfully how to pay for the over $3 million dollars in medical bills was not one of them.

“I didn’t have to worry about how much it would cost to save their lives, because that’s what union insurance is all about,” he said.

Thanks to his union benefits, Adam will only owe a fraction of the cost of medical bills, around $10,000. Much to his surprise, his union family stepped in once again to help with that burden. The Stampleys were recipients of money raised for “Carpenters Care”, an annual fundraiser that benefits an IKORCC family or families in serious financial need.

Business representatives, apprentices, and MAC members built and sold raffle tickets for a large playhouse. Members from Ohio and Kentucky joined brothers and sisters from Indiana for a charity ride in Greenwood. Altogether, members raised over $7,000 for the family. 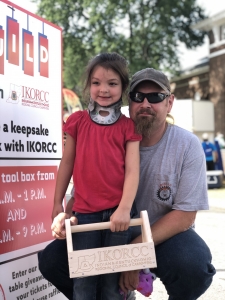 Adam Stampley and his daughter Araya build a toolbox at the Indiana State Fair, where IKORCC members raised money for their family.

Nearly seven months after the accident, Erica was released from the hospital. In October, she walked by Adam’s side as he went from apprentice to journeyman at his IKORCC graduation. Just days before Christmas, she will have what they hope to be her last leg surgery, the 30th one since that fateful April morning.

Adam is looking forward to a brighter 2020.

“When I walked into that hospital room, I fell to my knees,” he said. “I am so thankful to everyone that helped me and my family back up.” 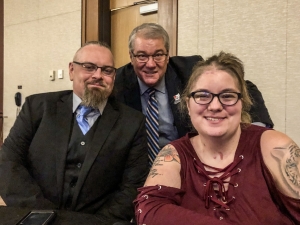 A Message from IKORCC EST Todd Pancake
Scroll to top