Few people have left the impact on the Indiana/Kentucky/Ohio Regional Council of Carpenters as Don Sherry did. Don Sherry tragically passed away in 2017. His 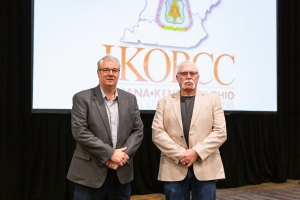 list of accomplishments is vast, and his impact on our union is unprecedented.

The Indiana/Kentucky/Ohio Regional Council of Carpenters is proud to name Bobby Miller of Local 357 as the 2021 Don Sherry Achievement Award winner. Bobby is a retired 23-year member with a passion for the union and volunteering. He served 17 of those years as an officer to the local, serving as a trustee, financial Secretary and as a delegate to the regional council. He also worked as a part-time instructor in Newburgh, Indiana.

After retirement Bobby did not slow down. He’s serving as a project manager for the Paducah-McCracken County Habitat for Humanity, where he has helped build two homes. Another is scheduled for next year.

“This award is presented to Bobby Miller in recognition of his work going above and beyond the call of duty. The award honors his outstanding achievements in the workplace, exceptional contributions to the community and outstanding service to the IKORCC,” said Todd Pancake, Executive Secretary-Treasurer for the IKORCC.

“One of the greatest rewards to Bobby is mentoring numerous trade school programs on the job site and giving them the unique opportunity to perform work at an actual construction site. Bobby enjoys this, as he is able to spread the word about a career in the trades and the benefits a union job provides,” said IKORCC Business Representative Chad Helm.

To see a video of Bobby’s nomination & acceptance click here.

Mass Timber Project Celebrates with Topping Out
Scroll to top